We noticed that Lou Dillon was having some difficulty eating his carrots over the past month, so we had the equine dentist out this week to float his teeth. Horses’ teeth continue to grow throughout their lives, but because they are not eating like they would in the wild, compounded with the fact that many domesticated horses have been inbred so much that they have issues such as parrot mouth (overbite), underbites, as well as crossbites. Horses who crib also have dental issues, and wear their front teeth down sometimes to the nubs. Horses who are older are also prone to losing their teeth. It is important for horses to have their teeth looked at by an equine dentist every year to ensure that they are able to chew effectively.

Lou Dillon was a reasonably decent patient, although the vet had to give him a little more sedation because he was not standing very still. She put a speculum on him, which helped to hold his mouth open while she was working on him. It doesn’t hurt, and she gave him a few breaks so his mouth wasn’t open for too long.

One major problem was that Lou Dillon has some missing teeth- this occured before he came to Hanaeleh, and so the vet had to work on him a little more than a horse who has had proper dental care throughout his life. She suggested that even though he was at a good weight, that we start giving him more pellets instead of so much hay, as they would be easier for him to eat.

After Lou Dillon’s teeth were done, Elizabeth took advantage of the fact that he was still sedated to clean his sheath. The sheath is the fold of skin over the penis, and it needs to be cleaned in order to prevent the buildup of dirt and smegma that can cause pain and inflammation. He didn’t have any noticeable beans (hard balls of dirt that can build up in the urethra), so it was a relatively short and simple procedure. Both Elizabeth and Lou Dillon were thankful for this small favor.

It took a while for Lou Dillon to come out of his sedation, but after an hour or so he seemed back to his normal self. We didn’t give him any food for about four hours, however, as horses who are still mildly sedated can end up bolting their food and can choke. He ate his dinner with gusto, however, and seemed happy that he was able to chew more effectively! 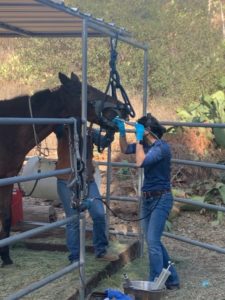 Lou Dillon would like to remind everyone to stay hydrated this summer! https://vimeo.com/727102267 Lou Dillon was found running in traffic in Watts (on Lou Dillon Ave). People were dodging him with their cars and throwing trash at him. He had barbed wire around his neck and he was 600 lbs … END_OF_DOCUMENT_TOKEN_TO_BE_REPLACED

When rescued Sable a few months ago, she was physically in very poor shape. Her coat was matted and fine, and she had urine scalding across her belly from lying in manure. She had been on some medication to treat her Cushings, but the dosage was incorrect so it wasn't helping much. Her feet were … END_OF_DOCUMENT_TOKEN_TO_BE_REPLACED