Heart of Battle (right) was a granddaughter of Secretariat. She suffered a permanent injury from the track at the age of 4. Hanaeleh rescued her when her owner died, and she was taken in by supporters of the Exceller Fund.

Horse racing is NOT a sport, it’s an industry.

Horse racing could be comparable to endurance or even show jumping. Race horses are athletes in their own right and horses participate in many forms of competition.

The racing industry is horribly corrupt, plagued by constant doping, charges of misconduct and cheating. The industry breeds tens of thousands of horses each year, without any regard for what will happen to the horses after their short racing career.

The Thoroughbred racing industry is a large contributor to why we have more horses than there is currently a market for in the United States, which fuels the slaughter pipeline to Canada and Mexico.

Congress must get on track with horse racing reform.

There is a bill in Congress right now to stop the abuse and reform the industry to focus on equine welfare. To learn more about the Horseracing Integrity Act of 2019 (HR 1754) click HERE.

6 Ways To Regulate the Horse Racing Industry and Mitigate Abuse

Hanaeleh believes that the racing industry can be rehabilitated, but only under duress. If the racing and Thoroughbred industries are truly interested in serving the horses and the public, they should adopt the following changes.

1. Separate the Jockey Club from the Thoroughbred Registry

Years ago, Thoroughbreds were a horse of choice for almost any discipline. Today, people look to other breeds.  The Thoroughbred should be bred for disciplines such as jumping, dressage, trail, etc., but instead, breeders continue to breed for one main purpose: racing.

While some of these horses can be retrained for other careers, the majority are so broken down or so specifically bred that they cannot compete with warmbloods or other breeds in the show ring.

The Jockey Club is a racing organization. The Thoroughbred breed should encompass so much more.  Separating the two could help the breed by focusing on the multiple disciplines in which Thoroughbreds can excel, the racing industry only being one. Brutus only three years old here, the same age as those horses racing in the Kentucky Derby. Notice how ungainly he is. He won’t stop growing until six years old.

Horses need about a year of training and then a year in which they are raced so they can qualify for the Derby This means they they are ridden at less than a year old!

Yearlings are horribly juvenile, both in the mind and body. Training these horses much, much too early puts an undue amount of stress on their legs and ankles, which leads to breakdowns when they are young, and early lameness when they are older.

All racehorses have a tattoo and we believe that in addition to, or instead of, this tattoo, all horses should be microchipped with the veterinary information filed with this chip.

Right now, a horse can be diagnosed with a devastating injury but the owners can sell the horse to a new owner without disclosing any information. The horse can be raced or made to compete with an injury that can cause permanent lameness.

This situation is horrible for the horse and for the new owners who now have a lame horse. The horse often ends up at auction, which is the slaughter pipeline.

4. Drug Test Every Horse, Every Race

It is no secret in the racing industry that horses are given illegal drugs. These drugs are used to increase performance and mask pain. The lack of regulation fuels corruption and greed.

Random drug testing is in place and the results often show egregious violations. It makes one wonder then why every horse is not tested every single race.

Considering the amount of horses who do test positive for drugs, it seems that the practice of drugging horses is more the norm than the exception. Veterinarians who are ethical often will leave the track because they are disheartened watching trainers over-medicate and over-train the horses, eventually breaking them down. The result is often an untimely death by euthanasia or a trip to the auction, which leads to death at a slaughterhouse.

Utilizing detention barns (such as the type used in harness racing) would reduce the amount of performance/pain drugs that are given to horses before racing. Horses are stabled in a special barn that is under constant surveillance two days prior to the race.

Any trainer AND owner whose horse tested positive for drugs should be banned for life. Ban one or two trainers/owners and see how quickly the rest of the group cleans up their act.

There is Some Hope for Regulation

We’ve seen a ray of hope recently. New York racing regulators on Jan. 23, 2017 gave preliminary approval to an expansion of equine drug testing and recordkeeping rules, and set a minimum set of penalties to be imposed on trainers and others with repeated equine drug violations. We’re encouraged to see this movement towards a more sane approach to a long-standing lack of oversight. 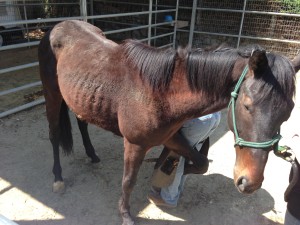 Brutus was a 3-yr-old stallion when he first came to Hanaeleh. He already had knee injuries, not even halter-trained and never officially registered.

Brutus is one of our rescued horses. He’s a Thoroughbred out of Florecita and by Mud Route. At least, that’s what the previous owner told us. This guy was never registered, probably due to the fact that his right foot turns out.

Not registering foals is common in the Thoroughbred industry as breeders will wait to register their foals to ensure that the foal is not going to have any major defects.

This is deceit at its finest! People pay stud fees based on the foals that are currently registered. People breed their mares to the stallions believing that the foals who are registered are the culmination of the foals produced. If foals like Brutus are not registered, no one will ever know there are foals with conformation or other issues.

The breeders are literally lying through omission.

Not registering horses also leaves the horse at a disadvantage. A horse’s papers gives us insight to their heritage and confirms their age. We find that registered horses often have a better advantage of being adopted than those without papers. Charley-After a few months at Hanaeleh. Charley’s paperwork stayed with him and after some research, we were able to reunite him with his previous owner! This is why paperwork is so important for a horse! Charley was a registered Thoroughbred sold by a trainer as revenge against the owner. Years later, Hanaeleh found him starving to death in someone’s backyard. Luckily, his paperwork stayed with him, and after doing some research, we were able to reunite him with his previous owner!

The Thoroughbred industry has another “dirty secret” flying below the radar: nurse mare foals.

In this horrible, unconscionable practice, an expensive mare’s foal is taken from her and given to a “nurse mare” so she can be bred again immediately. For a mare to take a nurse foal, she must be bred so she will give milk. Her biological foal is then taken from her at approximately a week old, sometimes killed immediately, sometimes slowly starved to death so his hide can be used for leather.

This is unacceptable and horrifying on so many levels.

Horses’ well-being should always come before anything else.

There are some organizations who will rescue these nurse mare foals, such as Last Chance Corral in Athens, Ohio. NONE of these organizations are supported by the racing industry. The racing industry is completely willing to turn a blind eye to these atrocities because the financial gains take precedent over the animals’ welfare.

Below is a trailer for “Born to Die,” a film about nurse mare foals and the wonderful rescue Last Chance Corral. I have always been fascinated with horse driving, but it is an expensive and exacting sport. Several years ago when we rescued a Friesian named D'Artagnan, I had a short foray into the horse driving discipline. He was enjoyable to drive, as long as you didn't want to stop (stopping is actually very … END_OF_DOCUMENT_TOKEN_TO_BE_REPLACED Lou Dillon loves to eat Quixote's orchard hay- but only if it's Quixote's. If we try to give Lou Dillon orchard, he scoffs at it, and won't eat it- he only wants alfalfa hay. The hay on the other side of the stall is greener? ﻿ … END_OF_DOCUMENT_TOKEN_TO_BE_REPLACED We have a lot of feral kitties at Hanaeleh. They are deemed as feral and non-adoptable by the animal shelters, and often they have no other options unless we are able to take them. The kitties are all spayed, neutered and vaccinated before they come to Hanaeleh, and they are various ages. We try to … END_OF_DOCUMENT_TOKEN_TO_BE_REPLACED